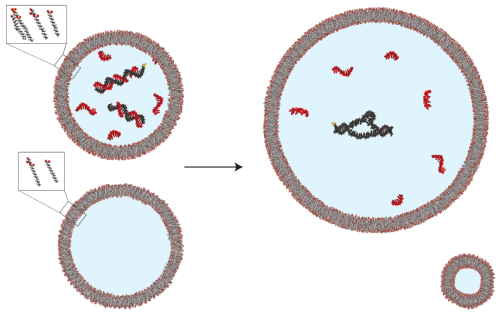 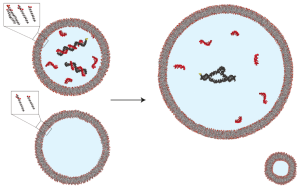 The emergence of homeostatic mechanisms that enable maintenance of an intracellular steady state during growth was critical to the advent of cellular life. Here, we show that concentration-dependent reversible binding of short oligonucleotides, of both specific and random sequence, can modulate ribozyme activity. In both cases, catalysis is inhibited at highconcentrations, and dilution activates the ribozyme via inhibitor dissociation, thus maintaining near-constant ribozyme specific activity throughout protocell growth. To mimic the result of RNA synthesis within non-growing protocells, we co-encapsulated high concentrations of ribozyme and oligonucleotides within fatty acid vesicles, and ribozyme activity was inhibited. Following vesicle growth, the resulting internal dilution produced ribozyme activation. This simple physical system enables a primitive homeostatic behaviour: the maintenance of constant ribozyme activity per unit volume during protocell volume changes. We suggest that such systems, wherein short oligonucleotides reversibly inhibit functional RNAs, could have preceded sophisticated modern RNA regulatory mechanisms, such as those involving miRNAs.

In the past, we and others have observed that cell-like “vesicle” structures formed from fatty acids can exhibit dynamic behaviors, including growth and division, that aren’t possible with the lipids found in modern cells (which usually are comprised of two fatty acids). These features make them attractive models for the earliest cells. While growth and division is an important part of a cell cycle, a problem seemed to exist. When a vesicle grows, its contents dilute. This, to some extent negates the benefit of having a compartment – containing all the components required for the primitive metabolism of an early cell in one place.
In this manuscript, we found a potential means of getting around this problem. We observed that an enzyme made of RNA, when in the presence of large quantities of shorter pieces of RNA (much like those the cell might have made in the course of making the RNA enzyme), was less active at high concentrations, and it exhibited activation upon dilution. When we encapsulated the RNA enzyme and short RNAs within a vesicle and allowed it to grow, the RNA enzyme exhibited enhanced activity when the vesicle grew. Because of this, vesicles containing both the RNA enzyme and short RNAs exhibited approximately constant enzyme activity as a function of the volume inside the vesicle. Vesicles containing only the RNA enzyme exhibited decreased enzyme activity after growth. We suggest that mechanisms like this, where short pieces of RNA inhibit RNA enzymes at high concentration and produce less inhibition at low concentration, could have allowed primitive cells to activate enzymes during growth (when their metabolic requirements were correspondingly higher), enabling a primitive form of homeostasis – the tendency of living things to maintain an approximately constant internal environment.